skip to main | skip to sidebar

My son has a learning problem that we had been referred to a doctor for. So we went in and while I spoke to the doctor my son played with the toys in the corner of the office. Once the appointment was finished my son and I were walking out when he asked me what the doctor had said. So I thought for a minute about how to try to make it a light subject without my son feeling like he was in trouble or stupid. So my answer was "well son its like this, you were not born a little boy you were really born a monkey" he looks away and seem to think about this then a light bulb goes off and he looks at me and says nah. I have no idea why my kids never believe me when I tell them things. But to this day every time we go to the doctors I say "yep still a monkey" 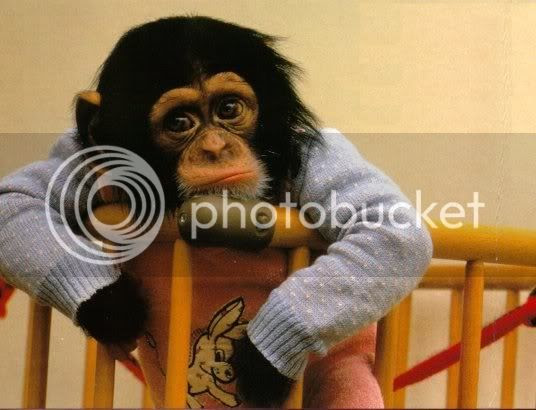 When I moved out of home I was 16 and all I had been taught to cook were boiled eggs, scrambled eggs and poached eggs. By the end of the first week of being out of home I was egged out. SO I had to start teaching myself to cook. My biggest disaster was I was making curried sausages from scratch (no pre-made packets). The recipe asked for 3/4 of a cup of beef stock. So I had a container of beef stock powder and added 3/4 cup of beef stock. This left me with a very dry powder mix on my sausages. It was then my flatmate that came in asking what I was trying to cover the sausages with that I then learned that Beef stock is a liquid and that I should of added water to a small amount of powder to make up 3/4 of a cup of beef stock. My family has not let me live it down even now 16 years later.

But I remember one night my boyfriend was teasing me about it and a friend told me she had one to top that. She had been flatting with her boyfriend and one of his friends. The friend asked if he could cook dinner, Since she was the only female in the house she was happy to hand him the apron. So he decided to cook sausages, veggies and mash potato. She asked him if it was ok if he could add cheese to the mashed potato. He said no worries. So when dinner was served they started eating. She could not taste the cheese and asked him if he added it. He said yeah but most of it drained out with the water after they were cooked not realising he was meant to put it in the potato after it was mashed.

Has anyone else got any funny stories of cooking disasters.
Posted by kiwispirit at 11:15 AM No comments:

I was extremely amused one day when my husband told me this story. One day he had to get his eyes tested. So he took himself to the optometrist. He had been wearing glasses for years and needed to check out the strength of his prescription. So he walked into the optometrist that he had been seeing for many years and told the lady at the counter he was there for his eye test. The lady at the counter then starts to laugh and states that she definitely thinks he needs to see the eye doctor asap as he was currently standing in the jewelers. The optometrist was next door.
Posted by kiwispirit at 11:33 AM No comments: